[00:00:06] so you may have heard that president has requested a tax holiday for the rest of 2020. And unfortunately, it may not be what you think. So, a tax holiday, it sounds fun. It sounds like a fun time and a lot of awesome things. There is going to be a downside to it. So most employers are not able to make the changes to their payroll systems in time.

[00:00:27] And there’s a couple of other concerns that made them not decide to opt into this program  and so what you’ll see is if you’re not impacted, you’ll just be paying your same social security and Medicare taxes. That’s really what this impacts and also is specific to employees that are making $104,000 or less.

[00:01:02] employers are not opting in for that reason alone, but the other big one. And I think the most glaring weakness of this whole plan and idea is you actually have to pay this back. So, it’s kind of a loan. Maybe it’s an interest free loan but you are going to have to pay it back all this money.

[00:01:18] And what that’s going to look like is for the employers that do opt into this and they do start paying your paycheck without withholding social security and Medicare, it means that they’re going to have to withhold double next year. And that actually is going to be recovered between January and April 2021.

[00:01:50] Employers are going to be responsible for collecting those in 2021, if they decide to the opt in. And so that’s another thing they’re like, well, that seems like it could be [00:02:00] detrimental to our employees that feel like they have more money to start getting used to spending a little bit more money and then really you’re going to end up having,  about 15%

[00:02:07] less from, your paycheck from now. If, if your employer starts giving you the full amount, not withholding the social security and Medicare, and then all of a sudden you’re getting that double tax, essentially, it’s the same thing as what you would have been receiving now. But the biggest issue is, if you don’t have a game plan for this, if you don’t have a plan in place to be able to ride that out with 15.3% instead of

[00:02:32] 7.6, 5% that you normally have withheld. So that is the biggest adjustment and the biggest fear for most employers that are deciding not to actually move forward with this. If you are impacted, you would have either seen it on your most recent paycheck, which would have been September 3rd, most likely, or you will see it on that next upcoming paycheck.

[00:02:50] Hopefully your employer is being proactive in communicating with you. But that’s really the, the biggest thing that you need to be aware of is even though you are getting this “tax [00:03:00] holiday”, It’s not as great of a future as of right now and its current state, as you would hope. And so, you will currently have to be paying these things back.

[00:03:09] So there is possibility that some things may happen where all of a sudden it’s just forgiven you are not going to have to pay that back , that would be a true holiday in that case, but I don’t want to count it. And it does not seem like it is not probable at this point. And the worst-case scenario is you can

[00:03:23] create a game plan to be able to function and to live off that 15.3% taxes instead of the 7.65% texts. And you will be better off for it if it is forgiven.  If you do not have to pay back that full amount next year, then you will just have that much extra money in savings 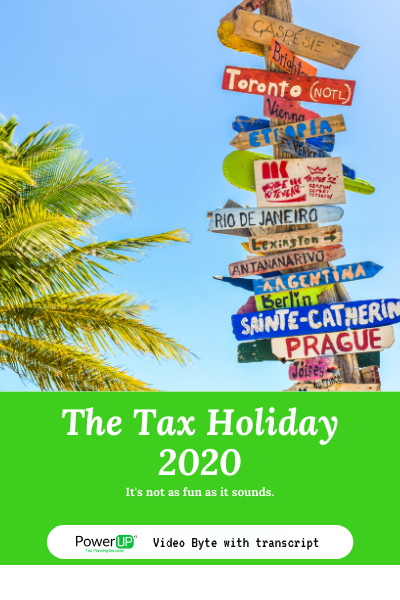